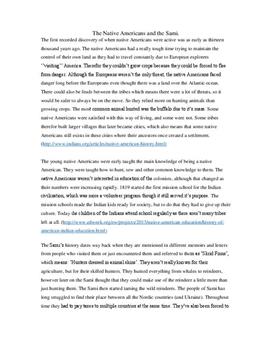 The first recorded discovery of when native Americans were active was as early as thirteen thousand years ago. The native Americans had a really tough time trying to maintain the control of their own land as they had to travel constantly due to European explorers ‘'visiting'' America. Therefor they couldn't grow crops because they could be forced to flee from danger. Although the Europeans weren't the only threat, the native Americans faced danger long before the Europeans even thought there was a land over the Atlantic ocean. There could also be feuds between the tribes which means there were a lot of threats, so it would be safer to always be on the move. So they relied more on hunting animals than growing crops. The most common animal hunted was the buffalo due to it's mass. Some native Americans were satisfied with this way of living, and some were not. Some tribes therefor built larger villages that later became cities, which also means that some native Americans still exists in these cities where their ancestors once created a settlement. (http://www.indians.org/articles/native-american-history.html)

The young native Americans were early taught the main knowledge of being a native American. They were taught how to hunt, sew and other common knowledge to them. The native Americans weren't interested in education of the colonists, although that changed as their numbers were increasing rapidly. 1819 started the first mission school for the Indian civilization, which was more a volunteer... Köp tillgång för att läsa mer Redan medlem? Logga in