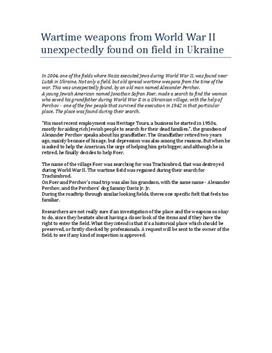 News Article - Everything Is Illuminated | Artikel

In 2004, one of the fields where Nazis executed Jews during World War II, was found near Lutsk in Ukraine. Not only a field, but old spread wartime weapons from the time of the war. This was unexpectedly found, by an old man named Alexander Perchov.
A young Jewish American named Jonathan Safran Foer, made a search to find the woman who saved his grandfather during World War II in a Ukrainian village, with the help of Perchov - one of the few people that survived the execution in 1942 in that particular place. The place was found during their search.

"His most recent employment was Heritage Tours, a business he started in 1950s, mostly for aiding rich Jewish people to search for their dead families.", the grandson of Alexander Perchov speaks about his grandfather. The Grandfather retired two years ago, mainly because of his age, but depression was also... Köp tillgång för att läsa mer Redan medlem? Logga in