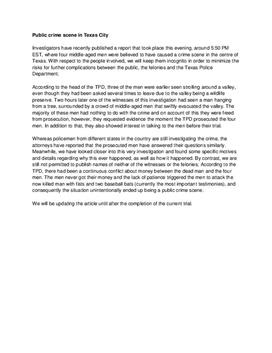 According to the head of the TPD, three of the men were earlier seen strolling around a valley, even though they had been asked several times to leave due to the valley being a wildlife preserve. Two hours later one of the witnesses of this investigation had seen a man hanging from a tree, surrounded by a crowd of middle-aged men that swiftly evacuated the valley. The majority of these men had nothing to... Köp tillgång för att läsa mer Redan medlem? Logga in