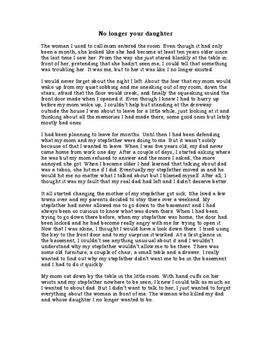 "I had been planning to leave for months. Until then I had been defending what my mom and my stepfather were doing to me. But it wasn't solely because of that I wanted to leave. When I was five years old, my dad never came home from work one day. After a couple of days, I started asking where he was but my mom refused to answer and the more I asked, the more annoyed she got. When I became older I had learned that talking about dad was a taboo, she hit me if I did. Eventually ..."... Köp tillgång för att läsa mer Redan medlem? Logga in

Material relaterade till No longer your daughter | Short story.