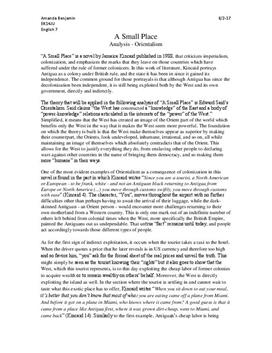 Orientalism and A Small Place | Analys

“A Small Place” is a novel by Jamaica Kincaid published in 1988, that criticizes imperialism, colonization, and emphasizes the marks that they leave on those countries which have suffered under the rule of former colonizers. In this work of literature, Kincaid portrays Antigua as a colony under British rule, and the state it has been in since it gained its independence. The common ground for those portrayals is that although Antigua has since the decolonization been independent, it is still being exploited both by the West and its own government, directly and indirectly.

The theory that will be applied in the following analysis of “A Small Place” is Edward Said's Orientalism. Said claims “the West has constructed a “knowledge” of the East and a body of “power-knowledge” relations articulated in the interests of the “power” of the West.” Simplified, it means that the West has created an image of the Orient part of the world which benefits only the West in the way that it... Köp tillgång för att läsa mer Redan medlem? Logga in

Material relaterade till Orientalism and A Small Place | Analys.