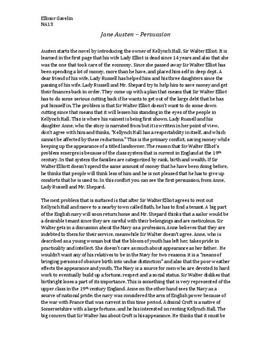 Jane Austen starts the novel "Persusasion" by introducing the owner of Kellynch Hall, Sir Walter Elliot. It is learned in the first page that his wife Lady Elliot is dead since 14 years and also that she was the one that took care of the economy. Since she passed away Sir Walter Elliot has been spending a lot of money, more than he have, and placed him self in deep dept. A dear friend of his wife, Lady Russell has helped him and his three daughters since the passing of his wife. Lady Russell and Mr. Shepard try to help him to save money and get their finances back in order. They come up with a plan that means that Sir Walter Elliot has to do some serious cutting back if he wants to get out of the large debt that he has put himself in. The problem is that Sir Walter Elliot doesn't want to do some down cutting since that means that it will lessen his standing in the eyes of the people in Kellynch Hall. This is where his vainest is being first shown. Lady Russell and his daughter Anne, who the story is narrated from but it is written in her point of view, don't agree with him and thinks, “Kellynch Hall has a respectability in itself, and which cannot be affected by these reductions.” This is the primary conflict, saving money while keeping up the appearance of a titled landowner. The reason that Sir Walter Elliot's problem emerges is because of the class system that is current in England at the 19th century. In that system the families are categorized by rank, birth and wealth. If Sir Walter Elliott doesn't spend the same amount of money that he have been doing before, he thinks that people will think less of him and he is not pleased that he has to give up comforts that he is used to. In this conflict you can see the first persuasion, from Anne, Lady Russell and Mr. Shepard... Köp tillgång för att läsa mer Redan medlem? Logga in