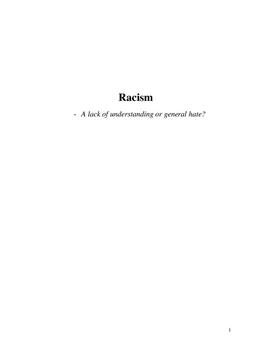 Thesis Statement
My thesis statement is:
Racism is a problem founded in unequal view of people with different ethnicity and a lack of understanding for different cultures, religions and values.

Questions my essay needs to address in order to prove the thesis statement correct or incorrect is;

Racism - A lack of understanding or general hate?

1. Introduction
1.1 Background
1.2 Aim and scope
1.3 Thesis Statement
1.4 Method and Material
2. Background
2.1 What is racism?
2.2. Factors that contribute to the arise of racism
2.3 The appearance and consequences of racism
3. Analysis
4. Conclusion
5. References

1. Introduction
1.1 Background
Racism has existed in all cultures and societies and it seems like today's society is no exception. There are probably hundreds of different definitions of the term but generally it could be defined as hatred or belief that one person is of less worth because of factors like skin color, culture, actual or supposed nationality (ethnicity).

Through time and history we've seen how racism has had a major influence and played a considerable role in wars, slavery and the formation of nations. We have all heard the stories about the slavery in America during the 19th century, the colonization and mistreatment of natives in South America, Africa and Australia. We have all heard the stories about the world wars, the holocaust and its terrible consequences for humanity, how millions of people were brutally murdered because of their ethnicity, because of something they could not even help, because of hate. These stories are terrifying and awful, but what is scary is that the story repeats. That the world and humanity don't seem to learn by history, which repeats over and over again. That we, after the Second World War had the United Nations to “keep world peace” to prevent the stories from repeating again, we had developed the human rights, we had developed a modern society with the democratic west in the lead, and we had the knowledge that such things as hate and racism was everything other than right. But still we could see genocide in Cambodia 1975-79, genocide in Rwanda in 1994, genocide in Srebrenica in 1995 and the list is most likely not finished yet. It doesn't have to be genocide to be counted; in everyday life we see... Köp tillgång för att läsa mer Redan medlem? Logga in