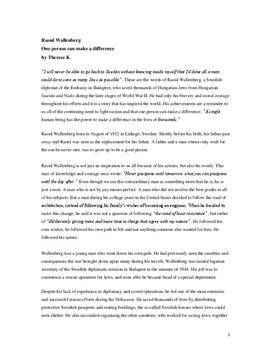 Presentation, Sammanfattning: Raoul Wallenberg - One Person Can Make a Difference

A well written essay with a few grammatical errors.

There are a few grammatical errors.

Raoul Wallenberg is not just an inspiration to us all because of his actions, but also his words. This man of knowledge and courage once wrote: “Never postpone until tomorrow what you can postpone until the day after.” Even though we see this extraordinary man as something more that he is, he is just a man. A man who is not by any means perfect. A man who did not receive the best grades in all of his subjects. But a man during his college years in the United States decided to follow the road of architecture, instead of following his family's wishes of becoming an engineer. When he decided to... Köp tillgång för att läsa mer Redan medlem? Logga in

Material relaterade till Raoul Wallenberg - One Person Can Make a Difference.