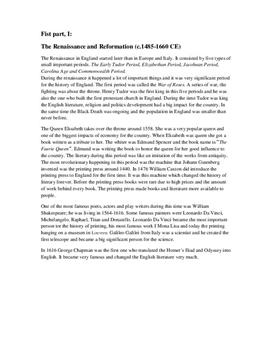 Fist part, I:
The Renaissance and Reformation (c.1485-1660 CE)
The Renaissance in England started later than in Europe and Italy. It consisted by five types of small important periods. The Early Tudor Period, Elizabethan Period, Jacobean Period, Carolina Age and Commonwealth Period.
During the renaissance it happened a lot of important things and it was very significant period for the history of England. The first period was called the War of Roses. A series of war, the fighting was about the throne. Henry Tudor was the first king in this five periods and he was also the one who built the first protestant church in England. During the time Tudor was king the English literature, religion and politics development had a big impact for the country. In the same time the Black Death was ongoing and the population in England was smaller than never before.
The Queen Elisabeth takes over the throne around 1558. She was a very popular queen and one of the biggest impacts of economy for the country. When Elizabeth was queen she got a book written as a tribute to her. The whiter was Edmund Spencer and the book name is “The Faerie Queen”. Edmund was writing the book to honor the queen for her good influence to the country. The literary during this period was like an imitation of the works from antiquity. The most revolutionary happening in this period was the machine that Johann Gutenberg invented was the printing press around 1440. In 1476 William Caxton did introduce the printing press to England for the first time. It was this machine which changed the history of literary forever. Before the printing press books were rare due to high prices and the amount of work behind every book. The printing press made books and literature more available to people.
One of the most famous poets, actors and play writers during this time was William Shakespeare; he was living in 1564-1616. Some famous painters were Leonardo Da Vinci, Michelangelo, Raphael, Titan and Donatello. Leonardo Da Vinci became the most important person tor the history of printing, his most famous work I Mona Lisa... Köp tillgång för att läsa mer Redan medlem? Logga in