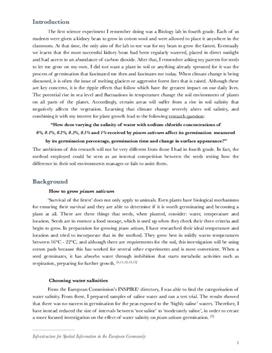 Frågeställning
“How does varying the salinity of water with sodium chloride concentrations of 0%, 0.1%, 0.2%, 0.3%, 0.5% and 1% received by pisum sativum affect its germination measured by its germination percentage, germination time and change in surface appearance?”

Introduction
The ﬁrst science experiment I remember doing was a Biology lab in fourth grade. Each of us students were given a kidney bean to grow in cotton wool and were allowed to place it anywhere in the classroom. At that time, the only aim of the lab to me was for my bean to grow the fastest. Eventually we learnt that the most successful kidney bean had been regularly watered, placed in direct sunlight and had access to an abundance of carbon dioxide. After that, I remember asking my parents for seeds to let me grow on my own. I did not want a plant in soil or anything already sprouted for it was the process of germination that fascinated me then and fascinates me today. When climate change is being discussed, it is often the issue of melting glaciers or aggressive forest ﬁres that is raised. Although these are key concerns, it is the ripple effects that follow which have the greatest impact on our daily lives. The potential rise in sea level and ﬂuctuations in temperature change the soil environment of plants on all parts of the planet. Accordingly, certain areas will suffer from a rise in soil salinity that negatively affects the vegetation. Learning that climate change severely alters soil salinity, and combining it with my interest for plant growth lead to the following research question: “How does varying the salinity of water with sodium chloride concentrations of 0%, 0.1%, 0.2%, 0.3%, 0.5% and 1% received by pisum sativum affect its germination measured by its germination percentage, germination time and change in surface appearance?” The ambitions of this research will not be very different from those I had in fourth grade. In fact, the method employed could be seen as an internal competition between the seeds testing how the difference in their soil environments manages or fails to assist them.

Background
How to grow pisum sativum
‘Survival of the ﬁttest' does not only apply to animals. Even plants have biological mechanisms for ensuring their survival and they are able to determine if it is worth germinating and becoming a plant at all. There are three things that seeds, when planted, consider: water, temperature and location. Seeds are in essence a food storage, which is used up when they check their three criteria and begin to grow. In preparation for growing pisum sativum, I have researched their ideal temperature and location and tried to incorporate that in the method. They grow best in mildly warm temperatures between 16°C - 22°C, and although there are requirements for the soil, this investigation will be... Köp tillgång för att läsa mer Redan medlem? Logga in