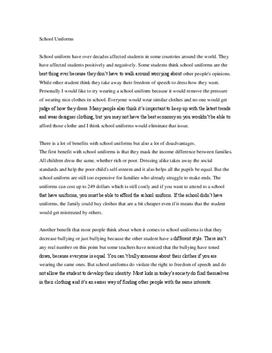 School uniform have over decades affected students in some countries around the world. They have affected students positively and negatively. Some students think school uniforms are the best thing ever because they don't have to walk around worrying about other people's opinions. While other student think they take away their freedom of speech to dress how they want. Personally I would like to try wearing a school uniform because it would remove the pressure of wearing nice clothes in school. Everyone would wear similar clothes and no one would get judge of how they dress. Many people also think it's important to keep up with the latest trends and wear designer clothing, but you may not have the best economy so you wouldn't be able to afford those clothe and I think school uniforms ..... Köp tillgång för att läsa mer Redan medlem? Logga in