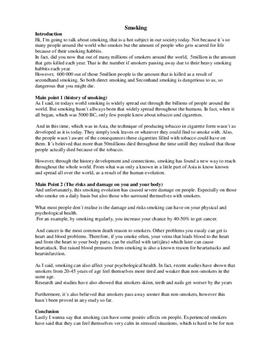 Smoking
- Introduction
- Main point 1: History of smoking
- Main point 2: The risks and damage on you and your body
- Conslusion

"Main point 1 (History of smoking):
As I said, in todays world smoking is widely spread out through the billions of people around the world. But smoking hasn´t allways been that widely spread throughout the humans. In fact, when it all began, which was 5000 BC, only few people knew about tobacco and cigarettes.

And in this time, which was in Asia, the technique of producing tobacco in cigarette form wasn´t as developed as it is today. They simply took leaves or whatever they could find to smoke with. Also, the people wasn´t aware of the consequneces these cigarettes filled with tobacco could have on them. It´s beleived that more than 50millions died throughout the time untill they realised that those people actually died because of the tobacco."... Köp tillgång för att läsa mer Redan medlem? Logga in