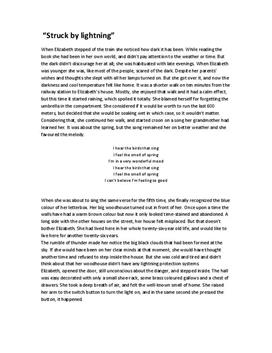 When Elizabeth stepped of the train she noticed how dark it has been. While reading the book she had been in her own world, and didn't pay attention to the weather or time. But the dark didn't discourage her at all; she was habituated with late evenings. When Elizabeth was younger she was, like most of the people, scared of the dark. Despite her parents' wishes and thoughts she slept with all her lamps turned on. But she got over it, and now the darkness and cool temperature felt like home. It was a shorter walk on ten minutes from the railway station to Elizabeth's house. Mostly, she enjoyed that walk and it had a calm effect, but this time it started raining, which spoiled it totally. She blamed herself for forgetting the umbrella in the compartment... Köp tillgång för att läsa mer Redan medlem? Logga in