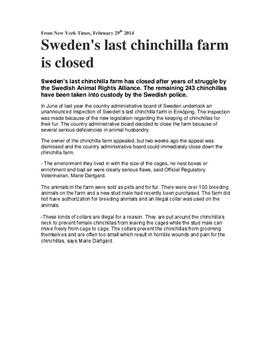 In June of last year the country administrative board of Sweden undertook an unannounced inspection of Sweden's last chinchilla farm in Enköping. The inspection was made because of the new legislation regarding the keeping of chinchillas for their fur. The country administrative board decided to close the farm because of several serious deficiencies in animal husbandry.