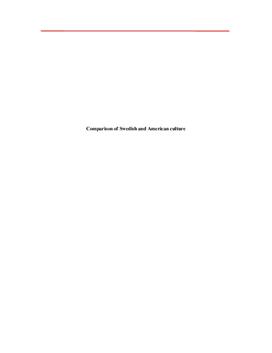 Comparison of Swedish and American culture

Introduction
Culture refers to the shared beliefs, knowledge, and values by a group of people. It is one of the aspects in the global society that has been used to define people. In most cases we will judge people according to their culture because it is what we have been brought up in. There are many cultures in the globe with some like the American and the Chinese cultures being very prominent in the world probably because of their strongest global economies. It is important to understand the cultures of different countries in the modern world where globalization is no longer a trial. Globalization is real and people have to move from one country to another (Benn 29). People have to move from Sweden to America and the same way people have to move from the Americas to Sweden. Therefore, to avoid culture shocks, it is important for people to gain some little knowledge on the different cultures across the world. The Swedish culture has not been studied much as compared to other cultures. Therefore, to make its study or theory effective and reliable it needs to be compared with other cultures. This essay will be aimed at analysing the differences between the Swedish and the American culture.