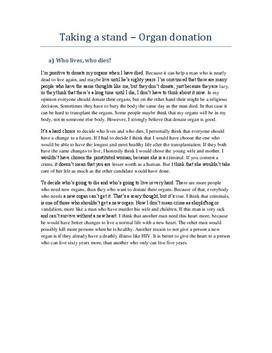 "It's a hard choice to decide who lives and who dies, I personally think that everyone should have a change to a future. If I had to decide I think that I would have choose the one who would be able to have the longest and most healthy life after the transplantation. If they both have the same changes to live, I honestly think I would chose the young wife and mother. I wouldn't have chosen the prostituted woman, because she is a criminal. If you commit a crime, it doesn't mean that you are lesser worth as a human. But I think that she wouldn't take care of her life as much as the other candidate would have done."... Köp tillgång för att läsa mer Redan medlem? Logga in