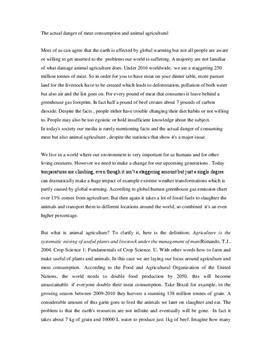 Most of us can agree that the earth is affected by global warming but not all people are aware or willing to get inserted to the problems our world is suffering. A majority are not familiar of what damage animal agriculture does. Under 2016 worldwide, we ate a staggering 250 million tonnes of meat. So in order for you to have meat on your dinner table, more pasture land for the livestock have to be created which leads to deforestation, pollution of both water but also air and the list goes on. For every pound of meat that consumes it leave behind a greenhouse gas footprint. In fact half a pound of beef creates about 7 pounds of carbon dioxide. Despite the facts , people either have trouble changing their diet habits or not willing to. People may also be too egoistic or hold insufficient knowledge about the subject.
In today's society our media is rarely mentioning facts and the actual danger of consuming meat but also animal agriculture , despite the statistics that show it's a major issue.

We live in a world where our environment is very important for us humans and for other living creatures. However we need to make a change for our upcoming... Köp tillgång för att läsa mer Redan medlem? Logga in

Material relaterade till The actual danger of meat consumption | Essay.