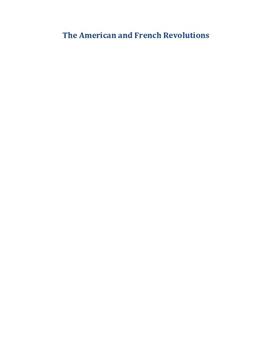 The American and French Revolution | Fördjupningsarbete

The American and French Revolutions

Both the American and French Revolutions have had a great influence on our modern democratic ideas, but what were the causes and consequences of the revolutions?
This essay will bring up background, important persons and events as well as a comparison between the both revolutions. It will also discuss some of the consequences that the revolution had on the individual countries and on the rest of the world both then and now.

During the 17th century North America became colonized by several European countries1. In the east, the process of colonisation involved two great European rivals, Britain and France. Britain had thirteen colonies on the east side during 1624-1774, which later evolved to the United States.2 These thirteen original states were owned, ruled and taxed by England, but each state had its own government and military.3
In Europe, England and France were battling in the seven-year war, which continued in North America as the French and Indian War. The French lost and were forced to surrender their territory in North America, in the Treaty of Paris 1763, to Britain and Spain.4 But the war wasn't all good for Britain, it affected the British economy so King George III decided sent Redcoats to enforce acts in the colonies.5 To raise American money to England they... Köp tillgång för att läsa mer Redan medlem? Logga in

Material relaterade till The American and French Revolution | Fördjupningsarbete.