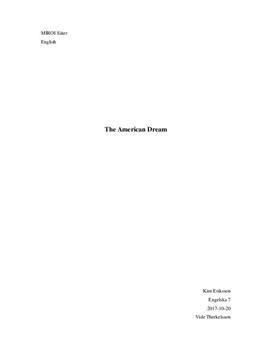 This is a very advanced essay, both in terms of language and how you approach writing about the subject.

You don't have to be afraid to 'represent' an ideology in a text as long as you are honest about it, just so you know; it's perfectly fine to criticize the ideology as well as the practical implementation behind the 'American Dream'.

If you were to revise any part of the text you should look over the conclusion though, especially the claim that "Nevertheless, the regional differences make it impossible to draw any conclusions from these facts" is problematic because you can draw conclusions from them if you research more. With that said, you would get around that by saying "one would need to do more precise research to draw conclusions", rather than claiming it is fundamentally impossible.

1 The American Dream 3
1.1 Background 3
1.2 Problem desciption and ideological discrepancy 3
1.3 Definition of the American Dream 4
2 The posibility of Class mobility in the US 5
3 Discussion 6
Sources: 7

1 The American Dream
1.1 Background
The United States of America is often depicted as the land of opportunity and equality – where everyone have equal rights and the ability to climb the ladder of class hierarchy. But is this a true picture of the American societal landscape? There are few, if any, scientists and political writers that maintain the idea that social class are none-existant in the American society today. There is, however, an inherent idea that within this class-based society, all have equal opportunities. This idea is based on the notion of the American Dream, which in return is a keynote in the American history and something that evolved from the foundation of American society as ”the land of opportunity”.
The journalist and writer Nancy Isenberg depicts the American history in a very different manner: ”To put class back into the story where it belongs, we have to imagine a very different kind of landscape. Not a land of equal opportunity, but a much less appealing terrain where death and harsh labor conditions awaited most migrants.” Here Isenberg is referring to the bloody history of colonialism and connects this to class-related issues. What she explicitly is saying is that the American society - as it is seen today - is based on class and the exploitation of the poor in favor of the rich. This essay will set out to investigate scholars research regarding this aspect in relation to ideological and cultural attitudes within the American society towards the American Dream... Köp tillgång för att läsa mer Redan medlem? Logga in