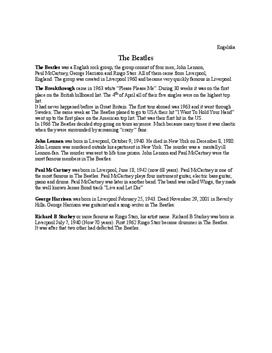 The Beatles was a English rock group, the group consist of four men; John Lennon, Paul McCartney, George Harrison and Ringo Starr. All of them came from Liverpool, England. The group was created in Liverpool 1960 and became very quickly famous in Liverpool.

The Breakthrough came in 1963 white “Please Please Me”. During 30 weeks it was on the first place on the British billboard list. The 4th of April all of their five singles were on the highest top list.

It had never happened before in Great Britain. The first tour abroad was 1963 and it went through Sweden. The same week as The Beatles planed to go to USA their hit ”I Want To Hold Your Hand” went up to the first place on the American top list. That was their first hit in the US.

In 1966 The Beatles decided stop going on tours anymore. Much because many times it was chaotic when they were surrounded by screaming “crazy“ fans... Köp tillgång för att läsa mer Redan medlem? Logga in