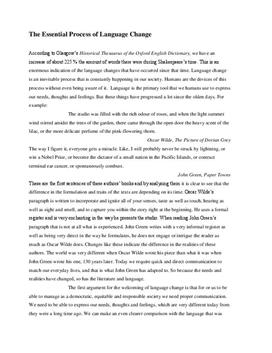 According to Glasgow's Historical Thesaurus of the Oxford English Dictionary, we have an increase of about 225 % the amount of words there were during Shakespeare's time. This is an enormous indication of the language changes that have occurred since that time. Language change is an inevitable process that is constantly happening in our society. Humans are the devices of this process without even being aware of it. Language is the primary tool that we humans use to express our needs, thoughts and feelings. But these things have progressed a lot since the olden days. For example:
The studio was filled with the rich odour of roses, and when the light summer wind stirred amidst the trees of the garden, there came through the open door the heavy scent of the lilac, or the more delicate perfume of the pink-flowering thorn.
Oscar Wilde, The Picture of Dorian Grey
The way I figure it, everyone gets a miracle. Like, I will probably never be struck by lightning, or win a Nobel Prize, or become the dictator of a small nation in the Pacific Islands, or contract terminal ear cancer, or spontaneously combust.
John Green, Paper Towns
These are the first sentences of these authors' books and by analysing them it is clear to see that the difference in the formulation and traits of the texts are depending on its time. Oscar Wilde's ... Köp tillgång för att läsa mer Redan medlem? Logga in