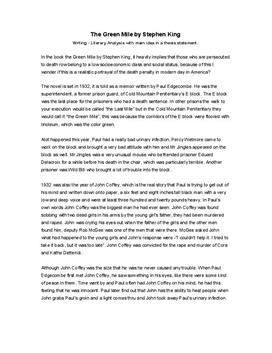 You bring up some interesting things from your book, and I'm really looking forward to talking some more about it in the oral exam.

In the book the Green Mile by Stephen King, it heavily implies that those who are persecuted to death row belong to a low socioeconomic class and social status, because of this I wonder if this is a realistic portrayal of the death penalty in modern day in America?

The novel is set in 1932, it is told as a memoir written by Paul Edgecombe. He was the superintendent, a former prison guard, of Cold Mountain Penitentiary's E block. The E block was the last place for the prisoners who had a death sentence. In other prisons the walk to your execution would be called “the Last Mile” but in the Cold Mountain Penitentiary they would call it “the Green Mile”, this was because the corridors of the E block were floored with linoleum, which was the color green.

Alot happened this year, Paul had a really bad urinary infection, Percy Wetmore came to work on the block and brought a very bad attitude with him and Mr Jingles appeared on the block as well. Mr Jingles was a very unusual mouse who befriended... Köp tillgång för att läsa mer Redan medlem? Logga in