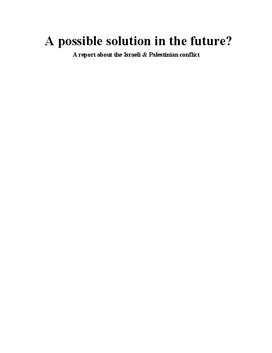 The Israeli-Palestinian Conflict: A Possible Solution in the Future? | Rapport

A possible solution in the future? A report about the Israeli & Palestinian conflict

1 Introduction
1.1 Background
The Israeli and Palestinian conflict has been going on for over 62 years. And there is still no solution to this bloodshed nearby. Many times and in many ways there has been attempts to bring peace to the troubled area, and all attempts has failed. The conflict has evolved a lot since the state of Israel arose. The conflict was, before the 1980s, between Israel and the surrounding arab states, and at present between Israel and Palestine. The disagreement between arabs and the israelis are great, but what makes this specific conflict so intractable? Is it possible to solve the conflict? I have investigated one of many attempts to peace (the attempts after the october war 1973) and tried to look at the factors that affected the intractable peace process.

1.2 Purpose
The intention of this analysis goes out to see if there is a possible resolution to the conflict between these two parties. And why there has not been a solution after the october war. I also want to give the reader a bigger understanding of the conflict. The conflict has got a lot of attention these past years through media. The report pass information through a neutral aspect.

1.3 Research At Issue
What factors have tributed to that peace could not be resolved after the October war? And is there any solution to bring peace between the two parties?... Köp tillgång för att läsa mer Redan medlem? Logga in

Material relaterade till The Israeli-Palestinian Conflict: A Possible Solution in the Future? | Rapport.