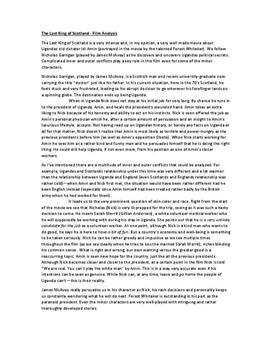 The Last King of Scotland is a very intense and, in my opinion, a very well made movie about Ugandas old dictator Idi Amin (portrayed in the movie by the talented Forest Whitaker). We follow Nicholas Garrigan (played by James McAvoy) as he discovers and uncovers Ugandas political secrets. Complicated inner and outer conflicts play a key role in this film even for some of the minor characters.

Nicholas Garrigan, played by James McAvoy, is a Scottish man and recent university-graduate now carrying the title “doctor” just like his father. In his current situation, here in the 70's Scotland, he feels stuck and very frustrated, leading to his abrupt decision to go wherever his forefinger lands on a spinning globe. The destination ends up being Uganda. When in Uganda Nick does not stay at his initial job for very long. By chance he runs in to the president of Uganda, Amin, and heals the president's wounded hand. Amin .... Köp tillgång för att läsa mer Redan medlem? Logga in

Material relaterade till The Last King of Scotland | Filmanalys.