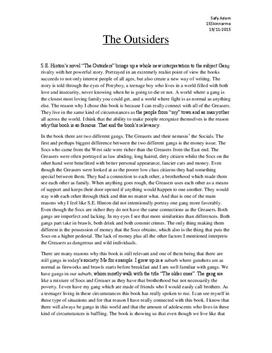 S.E. Hinton's novel “The Outsiders” brings up a whole new interpretation to the subject Gang rivalry with her powerful story. Portrayed in an extremely realist point of view the books succeeds to not only interest people of all ages, but also create a new way of writing. The story is told through the eyes of Ponyboy, a teenage boy who lives in a world filled with both love and insecurity, never knowing when he is going to die or not. A world where a gang is the closest most loving family you could get, and a world where fight is as normal as anything else. The reason why I chose this book is because I can really connect with all of the Greasers. They live in the same kind of circumstances as the people from “my” town and as many other all across the world. I think that the ability to make people recognize themselves is the reason why this book is so famous. That and the book's relevancy.