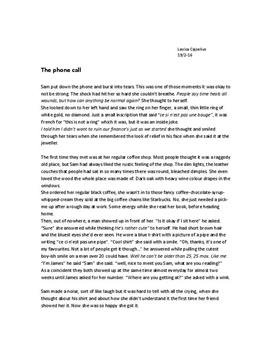 Sam put down the phone and burst into tears. This was one of those moments it was okay to not be strong. The shock had hit her so hard she couldn't breathe. People say time heals all wounds, but how can anything be normal again? She thought to herself.
She looked down to her left hand and saw the ring on her finger, a small, thin little ring of white gold, no diamond. Just a small inscription that said “ce si n'est pas une bauge”, it was French for “this is not a ring” which it was, but it was an inside joke.
I told him I didn't want to ruin our finance's just as we started she thought and smiled through her tears when she remembered the look of relief in his face when she said it at the jeweller.

The first time they met was at her regular coffee shop. Most people thought it was a raggedy old place, but Sam had always liked the rustic feeling of the shop. The dim lights, the leather couches that people had sat in so many times there was round, bleached dimples. She even loved the wood the whole place was made of.