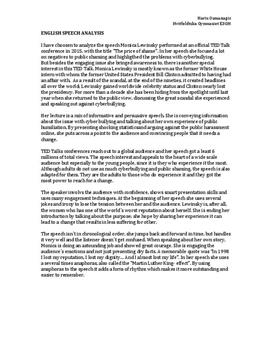 I have choosen to analyze the speech Monica Lewinsky performed at an official TED Talk conference in 2015, with the title “The price of shame”. In her speech she focused a lot on negatives to public shaming and highligthed the problems with cyberbullying.

But besides the engaging issue she bringed awareness to, there is another special interest in this TED Talk. Monica Lewinsky is mostly known as the former White House intern with whom the former United States President Bill Clinton admitted to having had an affair with.  As a result of the scandal, at the end of the nineties, it created headlines all over the world; Lewinsky gained worldwide celebrity status and Clinton nearly lost the presidency... Köp tillgång för att läsa mer Redan medlem? Logga in