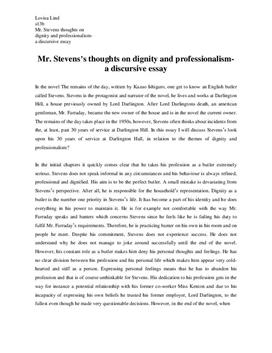 The Remains of the Day | Essä

In the novel The remains of the day, written by Kazuo Ishiguro, one get to know an English butler called Stevens. Stevens is the protagonist and narrator of the novel, he lives and works at Darlington Hill, a house previously owned by Lord Darlington. After Lord Darlingtons death, an american gentleman, Mr. Farraday, became the new owner of the house and is in the novel the current owner. The remains of the day takes place in the 1950s, however, Stevens often thinks about incidents from the, at least, past 30 years of service at Darlington Hill. In this essay I will discuss Stevens's look upon his 30 years of service at Darlington Hall, in relation to the themes of dignity and professionalism?

In the initial chapters it quickly comes clear that he takes his profession as a butler extremely serious. Stevens does not speak informal in any circumstances and his behaviour is always refined, professional and dignified.
... Köp tillgång för att läsa mer Redan medlem? Logga in

Material relaterade till The Remains of the Day | Essä.