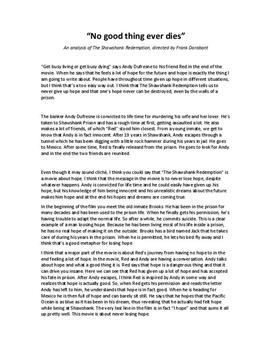 “No good thing ever dies”
An analysis of The Shawshank Redemption, directed by Frank Darabont

“Get busy living or get busy dying” says Andy Dufresne to his friend Red in the end of the movie. When he says that he feels a lot of hope for the future and hope is exactly the thing I am going to write about. People have throughout time given up hope in different situations, but I think that's a too easy way out. I think that The Shawshank Redemption tells us to never give up hope and that one's hope never can be destroyed, even by the walls of a prison.
The banker Andy Dufresne is convicted to life time for murdering his wife and her lover. He's taken to Shawshank Prison and has a rough time at first, getting assaulted a lot. He also makes a lot of friends, of which “Red” stood him closest. From a young inmate, we get to know that Andy is in fact innocent. After 19 years in Shawshank, Andy escapes through a tunnel which he has been digging... Köp tillgång för att läsa mer Redan medlem? Logga in