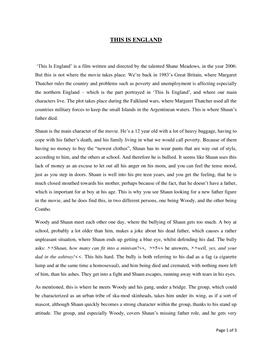 This is England | Film analysis

As mentioned, this is where he meets Woody and his gang, under a bridge. The group, which could be characterized as an urban tribe of ska-mod skinheads, takes him under its wing, as if a sort of mascot, although Shaun quickly becomes a strong character within the group, thanks to his stand up attitude. The group, and especially Woody, covers Shaun's missing father role, and he gets very attached to him. The group is soon divided by the return of old gang member Combo, after being in prison. Combo represents the pro-Nazi skinheads versus the fun loving vandalism of the Ska music and mod style teenagers. Combo wins over parts of the group, by approaching them, telling them about being proud of their English heritage, and persuades Shaun into believing, that the only way he can make his dead father proud, is to become a nationalist, and a true skinhead as himself. This is one of the main themes in the movie: How important the father role is to Shaun, and how he gets it covered, but maybe looking the wrong places. He soon gets integrated in the world of Combo, where racial slurs are thrown around and where violence and heavy drinking is allowed, and practiced on a daily basis... Köp tillgång för att läsa mer Redan medlem? Logga in

Material relaterade till This is England | Film analysis.