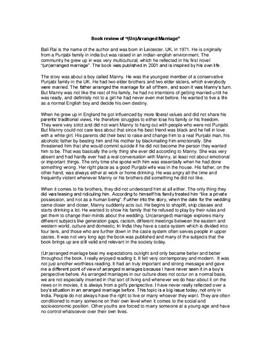 Bali Rai is the name of the author and was born in Leicester, UK, in 1971. He is originally from a Punjabi family in india but was raised in an indian-english environment. The community he grew up in was very multicultural, which he reflected in his first novel “(un)arranged marriage”. The book was published in 2001 and is inspired by his own life.

The story was about a boy called Manny. He was the youngest member of a conservative Punjabi family in the UK. He had two elder brothers and two elder sisters, which everybody were married. The father arranged the marriage for all of them, and soon it was Manny's turn. But Manny was not like the rest of his family, he had no intentions of getting married until he was ready, and definitely not to a girl he had never even met before. He wanted to live a life as a normal English boy and decide his own destiny.

When he grew up in England he got influenced by more liberal values and did not share his parents' traditional views. He therefore .... Köp tillgång för att läsa mer Redan medlem? Logga in