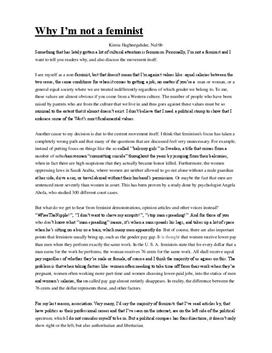 Why I'm not a feminist | Debattartikel

Something that has lately gotten a lot of cultural attention is feminism. Personally, I'm not a feminist and I want to tell you readers why, and also discuss the movement itself.

I see myself as a non-feminist, but that doesn't mean that I'm against values like: equal salaries between the two sexes, the same conditions for when it comes to getting a job, no matter if you're a man or woman, or a general equal society where we are treated indifferently regardless of which gender we belong to. To me, these values are almost obvious if you come from a Western culture. The number of people who have been raised by parents who are from the culture that we live in and thus goes against these values must be so minimal to the extent that it almost doesn't exist. I don't... Köp tillgång för att läsa mer Redan medlem? Logga in

Material relaterade till Why I'm not a feminist | Debattartikel.