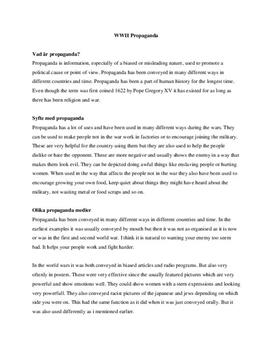 Vad är propaganda?
Propaganda is information, especially of a biased or misleading nature, used to promote a political cause or point of view. Propaganda has been conveyed in many different ways in different countries and time. Propaganda has been a part of human history for the longest time. Even though the term was first coined 1622 by Pope Gregory XV it has existed for as long as there has been religion and war.

Syfte med propaganda
Propaganda has a lot of uses and have been used in many different ways during the wars. They can be used to make people not in the war work in factories or to encourage joining the military. These are very helpful for the country using them but they are also used to help the people dislike or hate the opponent. These are more negative and usually shows the enemy in a way that makes them look evil. They can be depicted doing awful things like enslaving people or hurting women. When used in the way that affects the people not in the war they also have been used to encourage growing your own food, keep quiet about things they might have heard about the military, not wasting metal or food scraps and so on.

Olika propaganda medier
Propaganda has been conveyed in many different ways in different countries and time. In the earliest examples it was usually conveyed by mouth but then it was not as organised as it is now or was in the first and second world war. I think it is natural to wanting your enemy too seem bad. It helps your people work and fight harder.

In the world wars it was both conveyed in biased articles and radio programs. But also very oftenly in posters. These were very effective since the usually featured pictures which are very powerful and show emotions well. They could show women with a stern expressions and looking very powerfull. They also conveyed racist pictures of the japanese and jews depending on which side you were on. This had the same function as it did when it was just conveyed orally. But it was also used differently as i mentioned earlier.

Germany
The German Nazi Party's use of propaganda began long before the start of World War II. Adolf Hitler's book ‘'Mein Kampf'' was published in 1925 and many view this book as a blueprint for later Nazi propaganda.
During the years 1926-1933, Hitler and his National Socialist German Workers' Party .... Köp tillgång för att läsa mer Redan medlem? Logga in